COVID-19 and Unfreedom among US Meatpacking Workers 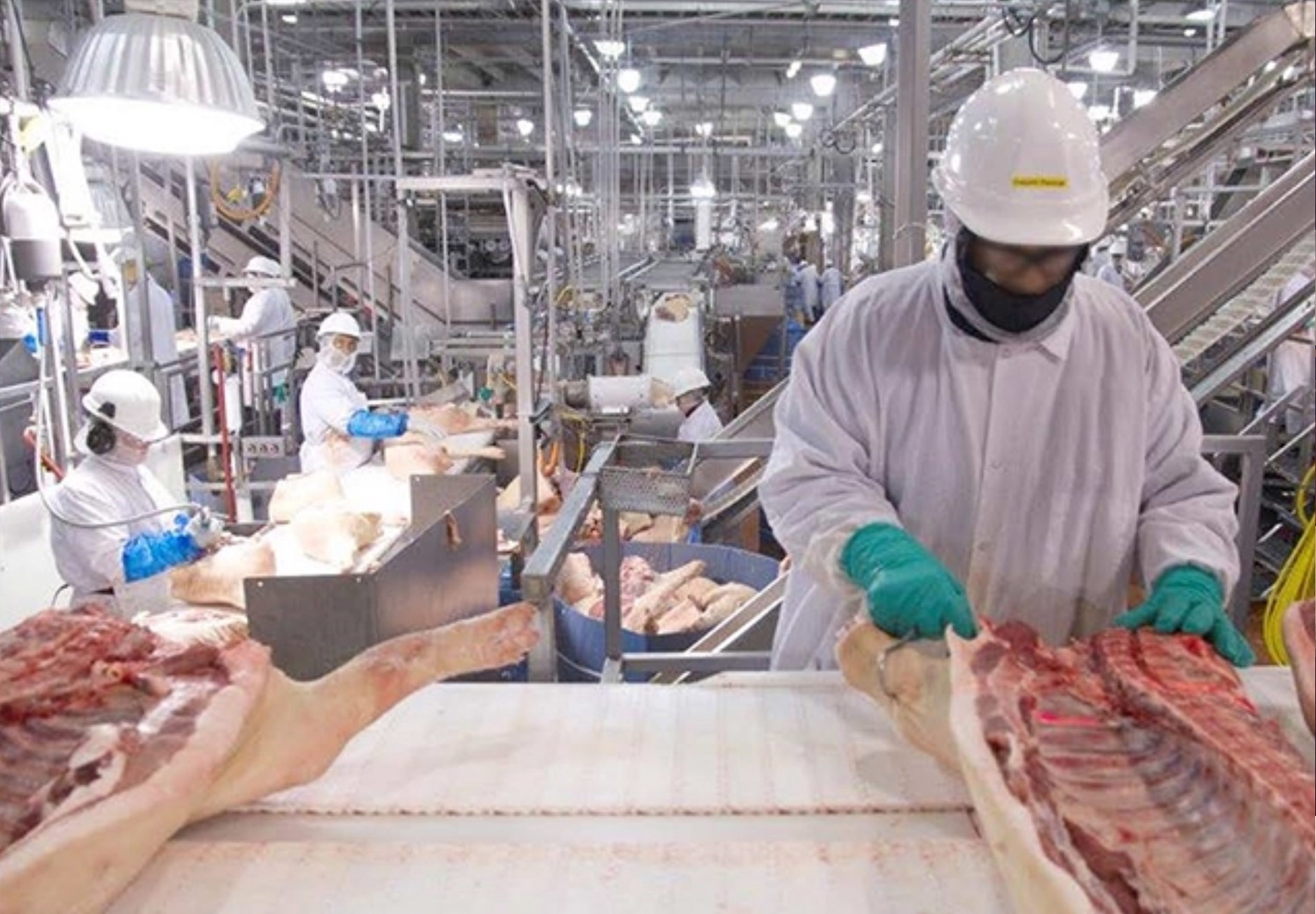 Nearly six months after the first complaint and after 1,294 confirmed COVID-19 cases and 4 deaths among its workers, the Smithfield Foods meatpacking plant in Sioux Falls, South Dakota, has been fined $13,494 for a single serious safety violation. Smithfield Foods earned $14 billion in revenue last year.

COVID-19 cases have ballooned in meatpacking plants across the United States, largely due to slow industry response to the virus’s spread among its workers during the early months of the pandemic.

After nearly 10,000 complaints, the US Occupational Safety and Health Administration issued only one other fine, against a JBS plant in Colorado, for $15,615. The largest meatpacking company in the world, JBS earned $51.7 billion in revenue last year.

Worker Precarity as an Industrial Strategy

Meatpacking workers in the United States are particularly vulnerable to exploitation by their employers due to language and educational barriers, lack of union and government protection, and most fundamentally, the workers’ often precarious immigration status.

In South Dakota, for example, recent immigrants make up 58% of the workforce according to a May 26 article in the Los Angeles Times. While it is hard to determine exact numbers of “illegal” immigrants, estimates range from 14% to over 50%.

Even before the pandemic began, injuries in the US meatpacking industry were often underreported, according to a 2016 study by Mora, Arcury, and Quandt in the American Journal of Industrial Medicine. Conditions in meat and poultry plants were “dirty, demanding and dangerous” for the largely foriegn-born, Latino workforce.

According to the study, despite the “structural violence” of the work due to its dangerous nature and their lack of power and other employment options, workers often tolerate these conditions because they prioritize their family’s financial needs over safety concerns. As a result of their precarity, these workers are more inclined to tolerate a “bad job.”

Workers’ capacity to complain about health and safety conditions is limited because of their imigration status. Geraldina Polanco notes that employers more generally “rely on the vulnerability of migrant workers generated through immigration controls to stimulate capital accumulation.” This is true in meatpacking, where employers use immigration status as a tool of coercion and retaliation for workers who speak up about bad conditions. Many workers are known by their employers to be “illegal” migrants, and this condition is weaponized by their employers.

Government as a Tool of Worker Suppression

When workers do speak up, consequences are grave. In August 2019, in the largest raid in over a decade, US Immigration and Customs Enforcement (ICE) arrested 680 migrant workers at seven Mississippi food processing plants. Perhaps coincidentally, one of the plants raided, a Koch Foods chicken processing plant, had only one year earlier settled a class action lawsuit for $3.75 million for sexual harrassment, national origin and race discrimination, and retaliation against female Hispanic workers who complained. The owners of the plant, the Koch brothers, are prominent funders of right-wing causes.

U.S. Equal Employment Opportunity Commission (EEOC) Regional Attorney Marsha Rucker. who brought forward the case, expressed the hope that "The significant monetary award, the corrective measures in this decree, including EEOC monitoring, should prevent this kind of alleged misconduct in the future." According to Human Rights Watch, however, migrant workers were already afraid of retaliation if they complained about workplace conditions. “We don’t work with our real names, so we are afraid,” said an undocumented worker from a chicken plant in North Carolina. “We don’t have the right to speak up.”

Rather than being chastened by government regulation, industry has found ways to use it as a weapon through other arms of the state, such as Immigration and Customs Enforcment (ICE). Legality can be used as a tool for worker suppression, as noted by Andrijasevic and Novitz, who pointed out in their 2020 article in the Journal of Human Trafficking that “unfree labor relations do not occur in the absence of labor market regulations but rather in the context of a complex ‘overregulated’ legal and codified regulatory landscape.” Legality is thus a tool used by employers such as in the case of the Koch brothers, who decide when it is convenient to disclose the illegality of their workforce and when it is not.

Incidents where workers’ precarious immigration status has been used as a reprisal to their complaints have made meatpacking in America a major site of workplace unfreedom. In this industry, where structural violence was implicit even before the pandemic, the work is increasingly unsafe. “Unlike slavery where men and women are given hard jobs and can be physically punished by their owners, modern [meatpacking] workers are not being hurt by direct physical violence,” the Industrial Medicine study explains. “Rather, they are being slowly injured and disabled through the structures that are put in place by automated industries.”

The process has been sped up by employers during the pandemic. Unwilling to modify working conditions at the expense of profits, the industry resisted the essentials of pandemic safety: PPE, staggered shifts, physical distancing and barriers between employees. Companies resisted local and state health department measures like social distancing and quarantines as “a nicety that makes sense only for people with laptops.” Smithfield Foods chief executive Kenneth Sullivan worried that his employees would simply stop showing up for work because of “the government continually reiterating the importance of social distancing,” according to a letter he wrote to Nebraska governor Pete Ricketts (R), obtained by ProPublica and later cited by the Washington Post. In a response to concerns raised by Senators Elizabeth Warren (D) and Cory Booker (D) dated June 30, he defended his company’s lack of action.

“Please understand, processing plants were no more designed to operate in a pandemic than hospitals were designed to produce pork,” Sullivan wrote. “In other words, for better or worse, our plants are what they are. Four walls, engineered design, efficient use of space, etc. Spread out? Okay. Where?”

Sullivan’s view reflects the industry’s disregard for health and safety that exacerbated the crisis in the plants and surrounding communities during the COVID-19 pandemic. The US government declared the COVID-19 outbreak a national emergency because of its effect on the economy and the need to safeguard citizens’ protein intake, ordering meat and poultry producers to continue operations as part of the nation’s critical infrastructure, despite outbreaks of the virus among workers “at some processing facilities.”

In June, 2020 the Food Environmental Reporting Network (FERN) noted that European meatpacking plants tend to be smaller, line speeds slower, unions stronger, and governments more inclined to protect workers. As a result, infection and death rates in the US are 9 times higher, despite having only a third more workers.

Cold temperatures, aggressive ventilation, and rapid production line speeds increase rates of COVID-19, but it is the industry’s reluctance to modify practices that increase worker safety but decrease profit margins. At least one worker reached out to Smithfeild and the government in mid-March to express her concern that processing lines were so crowded workers were like “tuna in a can.”

“They did not sit down with me,” Sandra Sibert told the Washington Post. “They only emailed or [left a] message saying they appreciated my concerns.” Sibert tested positive for COVID-19 in early April. 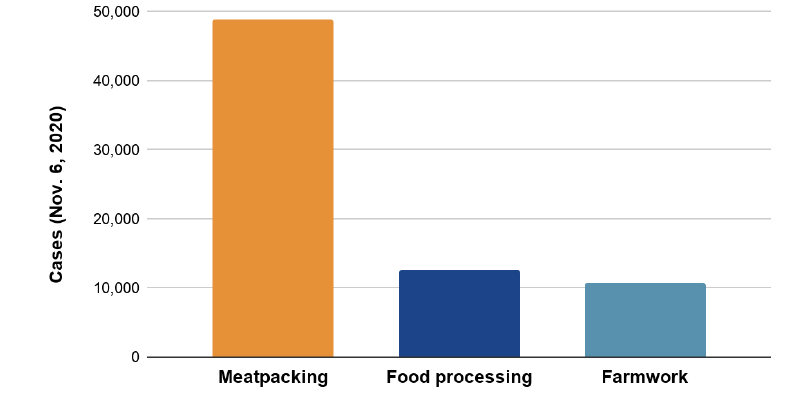 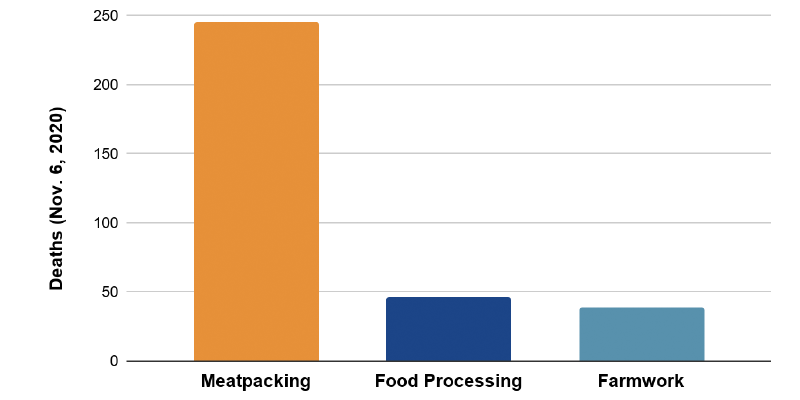 Deaths due to Covid-19 in US food production

Meatpacking in the US is uniquely vulnerable to COVID-19 outbreaks, but the European example shows that it doesn’t have to be. The US industry has largely failed to address those vulnerabilities which have cost workers their lives, and certain arms of the US government have proven their willingness to turn a blind eye and even to actively collaborate with industry to maintain worker precarity and powerlessness.

Some advocates fear that the limited fines imposed on the industry will in fact worsen conditions for workers. “These tiny fines are nothing to [meat plant owners],” Kim Cordova, president of the JBS plant’s UFCW Local, told the Washington Post. Because the penalty is so low, “they give an incentive to make these workers work faster and harder in the most unsafe working conditions imaginable.” This increases worker precarity because the workers understand that there will be no meaningful action taken by the government to protect them.

Meatpacking workers may increasingly see protesting bad conditions as futile when at best the response is a small fine to a multibillion dollar industry, and at worst the result is the deportation of hundreds of workers at the behest of employers. Because the US government’s response to complaints has been either detrimental (in the case of Koch Industries) or entirely inadequate (the pandemic), the degree of coercion and unfreedom has actually increased in the meatpacking industry.

Graham Coulter is an MA candidate in the School of Labour Studies at McMaster University
April 2021
www.gflc.ca